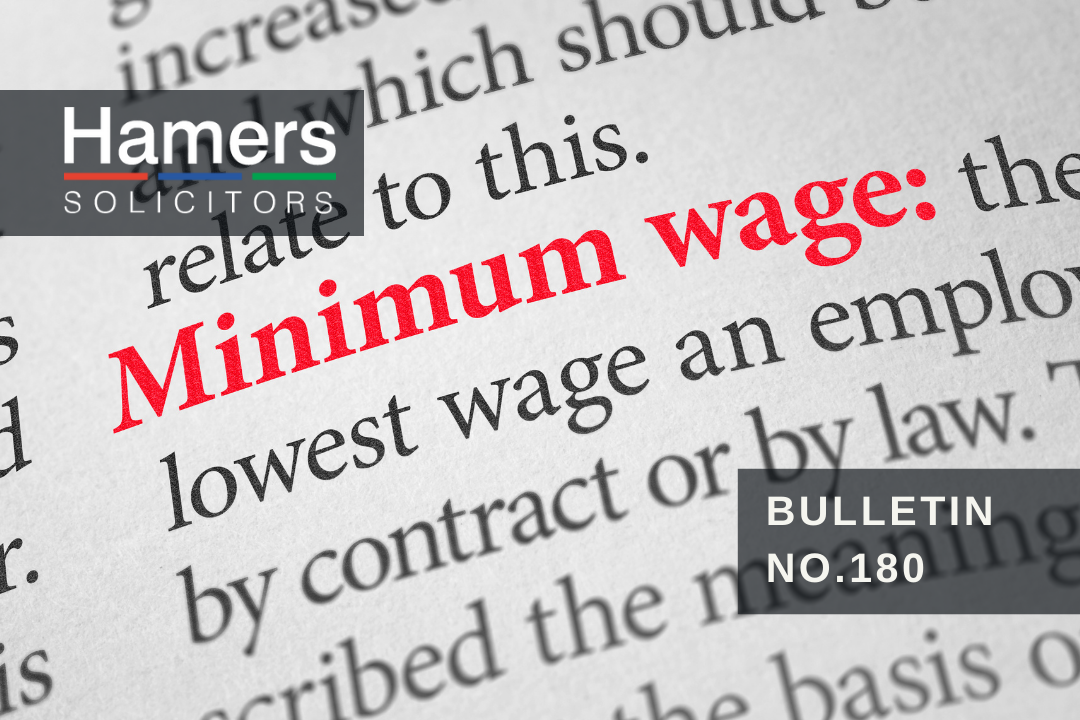 In the latest Hamers newsletter, our employment law expert Lynsey Howes looks into how the National Minimum Wage should be calculated; plus, strike-outs and another look at whistleblowing.

There are complicated rules around what can and cannot be treated as expenses for the purpose of calculating national minimum wage.

In the case of Augustine v Data Cars Ltd, the Claimant stated that he had not been paid the national minimum wage once his expenses were factored in, namely the deductions the Respondent made for his uniform and the rental of a car.

At first instance, the Tribunal had found that because the uniform was not compulsory and because the Claimant was free to use his own vehicle, the deduction made from his wages by the Respondent fell outside of regulations 13 and 14 of the National Minimum Wage Regulations 2015.

The EAT disagreed, stating that the Tribunal had used the wrong test: it was not a question of whether the deductions were necessary, it mattered not that the Claimant could use his own vehicle; rather the EAT found that the deductions for the vehicle and uniform were expenses in connection with the Claimant’s employment and as such fell within regulation 13.

This is a complex area and we would urge any employer concerned about whether they are complying with the National Minimum Wage Regulations to take advice.

The danger of not complying with Employment Tribunal orders, the “bury your head in the sand” approach, if you like, has been highlighted by the decision in Emuemukoro v Croma Vigilant (Scotland) Ltd.

Although the Respondent submitted its defence, it then failed to comply with orders of the Tribunal to prepare witness statements and prepare a bundle that contained all the relevant documents. As a result, the Employment Tribunal struck out the response on day one of what would have been a five-day hearing. The Employment Tribunal made clear that a fair hearing within the allocated time was now no longer possible as a consequence of the non-compliance.

The Respondent appealed, but the EAT upheld the findings of the Tribunal, making it clear that the Respondent’s own conduct had led to the finding that a fair hearing was not possible and that the decision of the Tribunal was the most proportionate outcome, namely striking out the response and making a judgment in the case. The alternative option was to postpone the hearing, which would cause prejudice to the Claimant.

This illustrates the importance of complying with the orders of the Tribunal, which should be done promptly and thoroughly.

Another case to add to the ever-complex whistleblowing regime. The EAT was asked to consider whether an employee’s dismissal for redundancy was automatically unfair if the decision was materially influenced by previously made public interest disclosures by the employee.

No, said the EAT.

The case involved a manager who had raised nine concerns, three of which the Employment Tribunal went on to find where public interest disclosures. The day after the final disclosure, the Claimant was informed that he was at risk of redundancy and a number of weeks later, following consultation was made redundant.

The Claimant alleged that he had been dismissed as a consequence of his disclosure which had a material impact on his dismissal. The Employment Tribunal agreed, finding that although there had been a genuine redundancy situation that the disclosure raised impacted the decision made. The Tribunal believed this influence made the decision to dismiss unfair.

The Respondent appealed to the EAT. The EAT found that the original Tribunal had misapplied the law. It stated that the “materially influences” test was only to be applied in detriment cases, not dismissals. If the case was about dismissal as a result of making a public interest disclosure, then the correct legal test was the sole or principal reason test, i.e. was the main reason or only reason for the dismissal because of the protected disclosure?

The EAT further commented that the Tribunal had failed by not considering the impact of the three disclosures when distinguished from all nine disclosures on the decision making process of the Respondent.

This shows the complexity of bringing and defending public interest disclosure claims, which need to be very carefully pleaded and defended.

If any of the matters raised in this newsletter raise any questions, please do not hesitate to contact us. Bye for now.

Lynsey and the team.