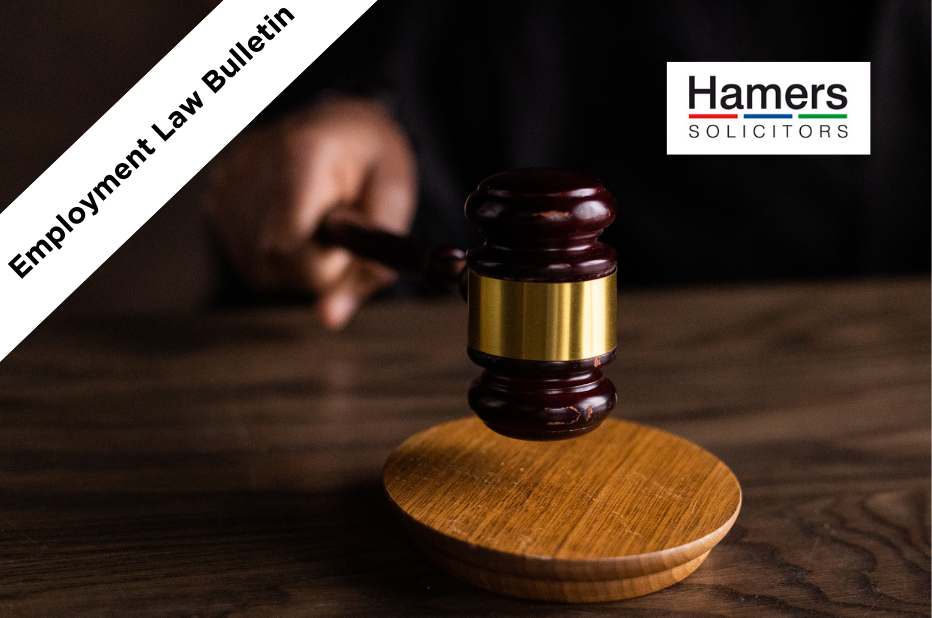 In the latest Hamers newsletter, our employment law expert Lynsey Howes looks into the laws surrounding heatwaves and working conditions, what the term ‘strike out’ means and Belief Discrimination.

The heatwave is behind us for now and the cooler days are very much welcomed. However, what are the responsibilities of the employer when the temperatures soar?

Unlike extreme cold, there is no maximum temperature enshrined in law at which an employee can down tools and go home. This does not mean however that the employer is absolved of all responsibility.

An employer’s must still exercise a duty of care towards its employees and extreme temperatures may create a health and safety issue which is the employer’s responsibility to deal with.

So, what can an employer do? We have come up with some suggestions, though they are only that, suggestions, which may help meet you meet your health and safety obligations. None of these suggestions are compulsory, more food for thought.

1. Consider allowing employees to take short‐notice annual leave.
2. Provide additional breaks during the day, particularly when the temperatures are at their highest.
3. Provide plenty of water and time to take extra water breaks.
4. Consider changing the hours of work to work at times when the temperature is cooler.
5. Consider allowing employees to leave early and make the time up later when the weather is cooler.
6. Consider relaxing uniform policies to allow staff to wear clothes more suitable to the weather.

Just a few possible tips for when we are next faced with extreme temperatures.

Striking out all or part of a claim is a sanction which can be imposed by a judge when a claim has little prospect of being successfully argued.

In the claim of Mackenzie v AA Ltd, the Court of Appeal was asked to decide whether it was unreasonable to strike out part of a claim for wrongful dismissal when it was the employer’s right to terminate a contract with a payment in lieu of notice on basic salary only.

Mr. Mackenzie had made a High Court claim for wrongful dismissal, claiming all of his notice and contractual benefits. The claim for those additional benefits was struck out on the grounds that it was established contract law, that the court would assume the employer would take the least costly option when terminating employment, namely the ability to pay basic salary only and not the additional contractual benefits.

The Court of Appeal agreed, confirming that there was no reasonably arguable case that the Claimant could bring for the additional benefits, as even if successful that he had been wrongfully dismissed, the option was open for the employer to pay the basic salary only. It would not be a breach of contract to limit the payment to basic salary and therefore arguing for the additional benefits had no reasonable prospect of success.

The case has been remitted back for a final decision.

A Christian doctor claimed direct and indirect discrimination and harassment on the grounds of his belief. The doctor was required during examinations to use the chosen pronouns in transgender patients. He objected referring to its incompatibility with his Christian faith and his lack of belief in transgenderism.

At the EAT, the Claimant’s appeal was also rejected. Even though the EAT rejected the claims, it criticised the reasoning of the first Tribunal. The EAT pointed out that the Claimant’s beliefs were within the scope of the Grainger guidelines, namely his views were worthy of respect in a democratic society, were not incompatible with the rights of others or with human dignity.

However, as the employer had tried to find solutions to the issue, the claims of direct discrimination and harassment failed on the facts. The claim of indirect discrimination failed, as the employer was able to show that its provision, criteria or practice, namely to treat all of its service users with respect and to promote equal opportunities, was a legitimate aim.

This case illustrates the need for good processes, taking time to look at all beliefs and arguments and the need to justify any provision, so that it can be shown to have a legitimate aim.